I find Irish culture to be extremely fascinating. Probably it’s because, being Ireland an insular Country, it managed to preserve many of its peculiarities, probably it’s just because I’m foreign and everything seems weird to me. Whatever the case, I often find myself, with a mixed feeling of curiosity and confusion, wondering “But why?”. I thought it would be interesting to write down some of the whys I collect everyday, do some research to try and find all the answers and share them with you. In some cases what I discovered was even more curious and interesting than the questions.

Ladies and gentlemen, I am proud to present to you the six whys of the Irish culture.

#1.Why is every street sign written in two languages?

When you come to Ireland, one of the first things you notice might be the fact that street signs are written both in English and in another obscure, alien language. What you are seeing see is actually an instance of Gaelic, the original Irish language. 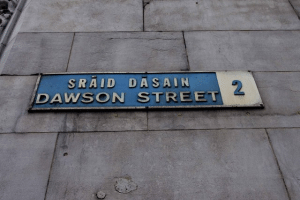 The slow suppression of the language is due to many factors: first of all, the English did not see the use of Irish favourably, since it was considered to be a threat to the English language. Other factors, such as the Irish famine, saw the decrease of Irish speakers. At the end of the English-rule, Gaelic speakers accounted for less than 15% of the population. It is estimated that the current active Irish-language scene probably comprises 5 to 10 per cent of Ireland’s population.

#2. Why is the shamrock associated with Ireland? 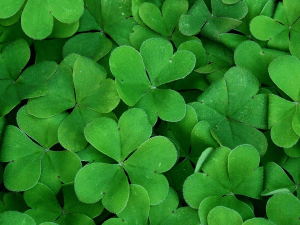 It is believed the shamrock-Ireland association to have religious origins. Although St. Patrick, the founder of Christianity in Ireland and Patron Saint of the Country, never mentioned the shamrock in any of his writings, it is said that the Saint would use this plant as a metaphor to explain the mystery of the Holy Trinity to the pagan celtic. The shamrock, which at first was only associated with St. Patrick, started to become a national symbol when it was first used as an emblem by voluntary Irish militias in the late 18th century. From then, the shamrock as a symbol for Ireland became incredibly popular, also thanks to different songs and ballads in which it was mentioned (such as https://www.youtube.com/watch?v=tZoqYZ2Hd9c). Ireland slowly gained the nickname of Shamrock shore.

#3. Why is the harp the national symbol of Ireland?

Even if, outside of Ireland at least, it is far less famous than the shamrock, the actual official emblem of Ireland has been, for several centuries, the Irish harp. It’s the same harp you can find in the Irish euro coins and in some Irish companies logos. What is this harp and why was it chosen as the official symbol of Ireland? 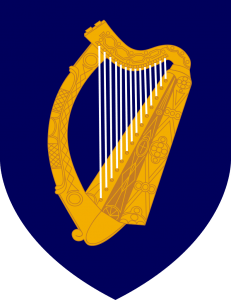 First of all, the story of this instrument is strictly tied with the history of the island. Although the earliest origins of the instrument are lost in time, there are testimonials of the harp that back at least 1000 years. The Celtic harp is also referred to be the only music played during the Crusades. When the English monarch Henry VIII (whose passion for music was exceeded only by his wife-execution hobby) declared himself King of Ireland in the XVI century, he chose the harp as the official national symbol of Ireland, and it stamped it onto the new coinage.

Interesting trivia: Ireland is the only country in the world that has a musical instrument as its national symbol.

#4.Why is green the colour of Ireland?

This is a very interesting one. In fact the actual colour of Ireland is not green but blue (if you don’t believe me, have a look at the colour of the Constitution. See? It’s blue! And there’s also the harp!). In the XVIII century, King George III created a new order of chivalry for the Kingdom of Ireland in the XVIII century. The Order of the Garter (Kingdom of England), already used a dark blue, while Scotland’s Order of the Thistle used green, so he went with a lighter blue for the Irish Order of St Patrick. This colour was known as “St Patrick’s blue” (creativity was not ancient people’s forte). This colour is still greatly used in sports (such as the Dublin GAA county teams).

But what about the colour green then? It is literally everywhere, from souvenir shops to letterboxes! 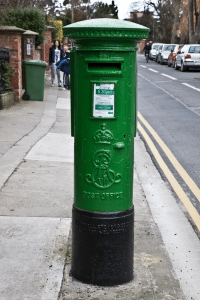 Well, nobody really knows exactly why green has become so predominant. It is surely strictly tied with the nationalist movement, as Ireland wanted a colour to symbolically separate them from the various reds and blues associated with England, Scotland and Wales. But probably even more influential was the fact that Ireland was already referred to as the “Emerald Isle” and, since Ireland seems unanimously considered to be “greener” than other countries, this colour simply looks like being more suitable to represent Ireland and Irishness. It was simply kind of natural.

#5.Why is the Irish flag green, white and orange?

As you (hopefully) know, the national flag of Ireland is a tricolour of green at the hoist, white in the middle and orange. What you might not know – and probably never asked yourself – is the reasons behind this choice of design. 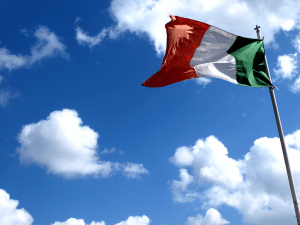 The tricolor was most likely designed after the French flag, since the French revolution inspired the Irish national movement. Although the flag was made famous during the Easter rising in 1916, it was first flown by Thomas Meagher in 1848, who yearned for a new independent Ireland. In this new nation, he hoped the discrepancies between Irish Catholic and Protestants would be overcome: why, he thought, don’t we join forces so we can easily reach independence?

This hope for cooperation is symbolised in the flag’s colours: the green stands for the Irish Catholic, the Orange for the Protestants and the white in between signifies the lasting truce between them.

#6.Why are potatoes so popular in Ireland?

When I first arrived in Dublin, I had the impression that Irish people ate potatoes all the time. That was not very far from the truth: in 2013, each Irish person ate, on average, 91.5 kg of potatoes, against the 32.6 kg of the rest of the World.

The popularity of the tuberous in the Country is probably due to the fact that the history of potatoes and of Ireland are strictly entangled. The development of Ireland, in fact, actually owes much to potatoes. This food, originating in South America, was first introduced in the Country because Britain, which rejected potatoes because they grew underground (aka Satan’s realm), decided that the Irish were the perfect laboratory mice and decided to test them in the Irish colony first. 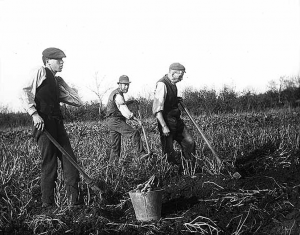 This wicked experiment actually turned out very well for the Irish population: potatoes could exploit the soil incredibly much better, and thus produce much larger yields, than grains. Soon, potatoes provided 80 percent of the average peasant’s caloric intake, with a consumption from 3.5 to 7 kg of potatoes each day per person. Potatoes seemed to be the magic food, providing enough protein, vitamins and calories. The spread of the potatoes contributed to the growth of the Irish population, as infant mortality plummeted: the Irish population, between 1780 and 1840, increased from 4 to 8 million.

Sunshine and rainbows, right? Not so fast! In 1845, in fact, a virulent fungus spread through Western Europe, completely rotting the potato harvest. Ireland was, by this time, strongly dependent on the potato: by 1848, the consequent famine had killed a million people, while an estimated other half million was forced to flee the Country. A collaboration of international scientists led to the rebounding of the crops: at least, the potato famine catalysed agricultural science.

The effects of famine permanently affected the island from a demographic, political and cultural point of view: for example, it contributed to the shift from Irish to English as the main language, since those most affected by the famine spoke Irish.

#7.Why is the Irish population catholic?

Ireland was a British colony until 1922. It is therefore surprising that, unlike the English, the Irish have never adopted the Protestant religion. 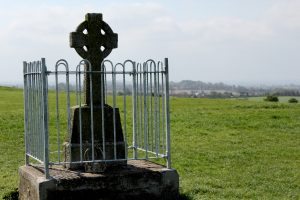 As mentioned earlier, Christianity was assertedly introduced in Ireland in the 5th century by St. Patrick, a native of Roman Britain, who managed to replace old pagan traditions with Catholic ones. During the British occupation, the English crown, obviously,  attempted to impose the Protestant Reformation into Ireland. But the Irish were incredibly proud, they would rather die than letting the English impose their religion on them! Catholicism thus became the symbol of Irish identity around which the Irish gathered in response to the imposition of the English culture. The British, of course, knew what Catholicism represented and the Catholic majority were promptly suppressed. What the British did not know, however, is that the Irish were as stubborn as a mule: the more Catholicism was suppressed, the stronger its association with the Irish identity became.

The Irish harp is the official symbol of Ireland: http://www.irish-genealogy-toolkit.com/irish-harp.html

Irish roots: The potato’s role in history goes far beyond the famine: http://www.post-gazette.com/opinion/Op-Ed/2012/03/16/Irish-roots-The-potato-s-role-in-history-goes-far-beyond-the-famine/stories/201203160214

Potato Consumption Per Capita in Ireland:http://www.helgilibrary.com/indicators/potato-consumption-per-capita/ireland/

WHY did Ireland remain Catholic?:http://www.ewtn.com/v/experts/showmessage.asp?number=443485&Pg=&Pgnu=&recnu=

Fifteen facts about the Irish flag and 1916:http://www.irishtimes.com/culture/heritage/fifteen-facts-about-the-irish-flag-and-1916-1.2362893

So you know Ireland’s national colour might not be green, right?:http://www.thejournal.ie/ireland-national-colour-blue-828597-Mar2013/