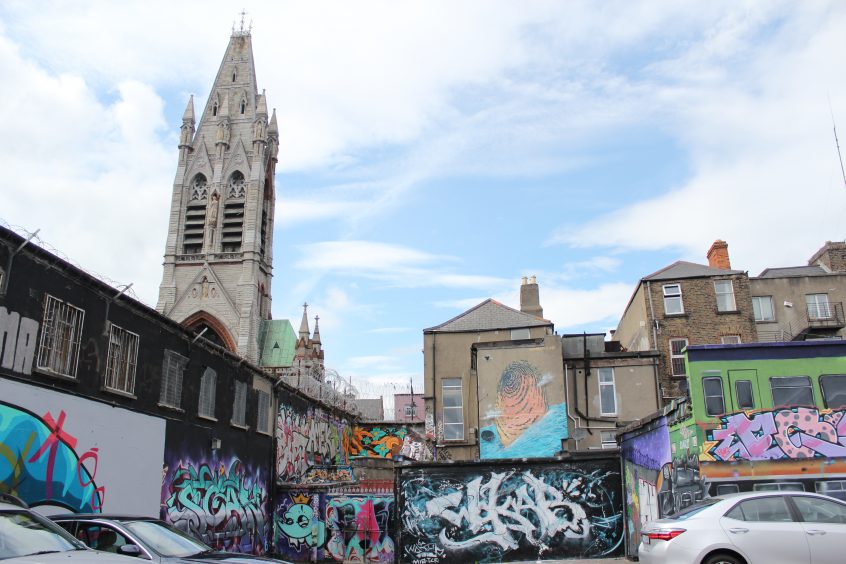 We have already talked about how learning English is not only a matter of studying grammar. A language is, in fact, a representation the culture and the history of a country. In Dublin, you can find many hidden treasures, the legacy of a city unknown to tourists, that make it a veritable open-air museum. You just need to know where to look!

Continue reading to discover 9 of the secrets treasures of this city and go have a journey through secret Dublin!

In front of the south gate at the entrance of King’s Hill garden, you will be welcomed by a quite odd spectacle. Wow! A majestic London plane tree!

Which is also eating a bench.

The bench is original from the 19th century, just as the others you can find in the garden. This extravaganza was also inserted in the heritage tree database “arboricultural curiosity”.   The tree, however is not indicated by any signs, is quite a vip, as it appeared in various films that have been made in Dublin such as Anne Hathaway’s Becoming Jane and Glenn Close’s Albert Nobbs.

It brings up some scary question: has nature finally started to take revenge on humanity? 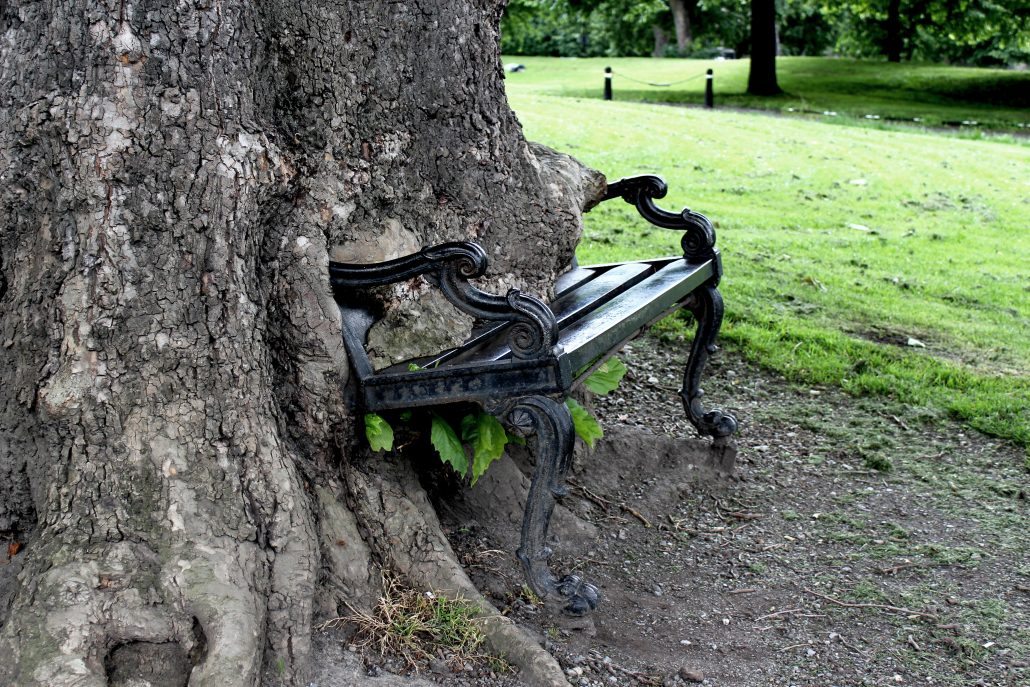 Grattan bridge is known among Dubliners as Capel street bridge, since it connects Parliament street on the southside of Dublin with Capel street on the north. The current bridge was built in 1872, but it went through different renovations. However, there is one detail that was left untouched: the ornate cast iron lamp standards on the bridge. And the base of these, you can find something almost unnoticeable: two mythical hippocampus, or sea-horses, a creature from greek mythology. These creatures have a historical importance: first of all, they are a symbol of Dublin as a marine city; secondly, they are a memory of the original bridge.

The same creatures appear on lamp posts next to the statue of Grattan on College Green. 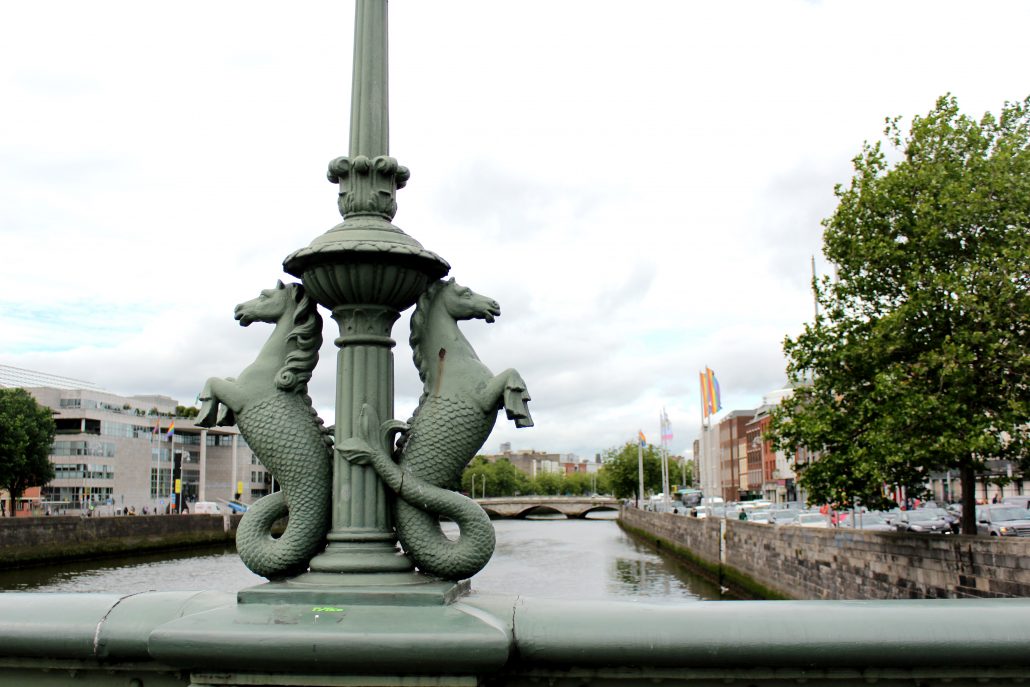 Where to find it: Grattan bridge Dublin 2

March 2nd 1948, in Ballyshannon, Ireland, was not a regular day: today a legend was born. I am talking about Rory Gallagher, one of the greatest bluesman ever existed. In 2015, 10 years after his early death, the city of Dublin decided to demonstrate its devotion and pay tribute to this great artist. They crafted a perfect bronze reproduction of the legendary Fender Stratocaster and hanged in the Rory Gallagher corner, to properly honour the bluesman’s memory. It really is a perfect reproduction: it also features the stains created from Gallagher sweat, that would erode the paint. 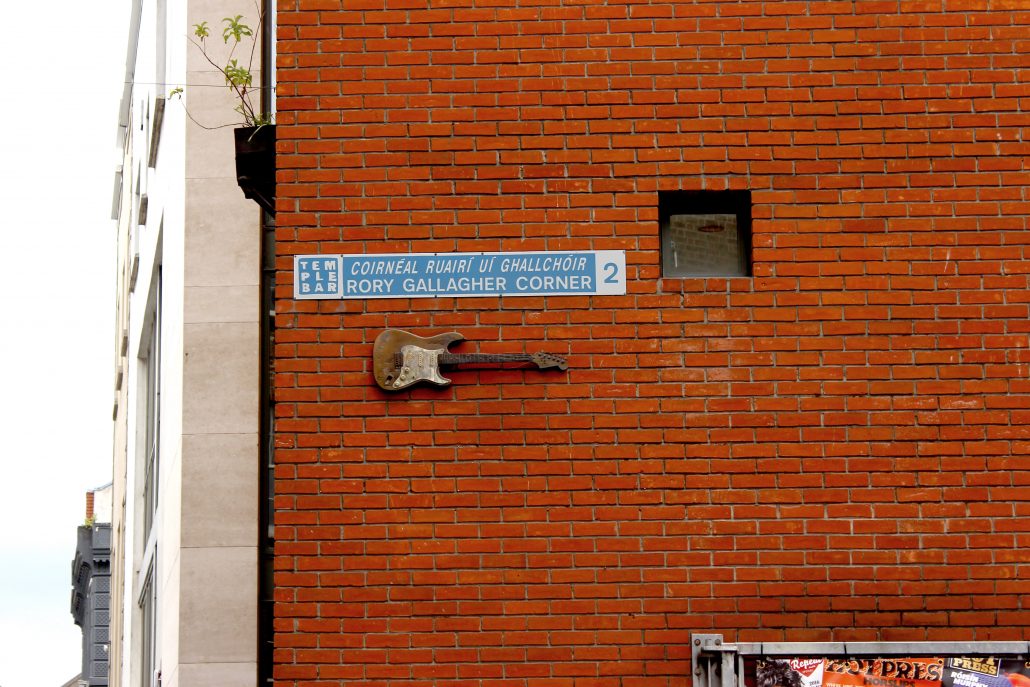 Where to find it: Rory Gallagher Corner, Temple Bar, Dublin 2

If you are into street art, in Dublin there is an unexpected veritable graffiti gallery hidden in the parking lot of a theatre. I am talking about the Tivoli car park, where each year All City Jam organises an event during which artists from all over the globe gather to spray their impressive work on these walls. There really is some superb work among these graffiti, such as the surreal cigarette smoking woman whose half of the face is a spiral, or the titanic sinking ship that says “don’t give up on us baby”. Over the walls of the parking, to make it more suggestive, you can see a glimpse of John’s Lane church. 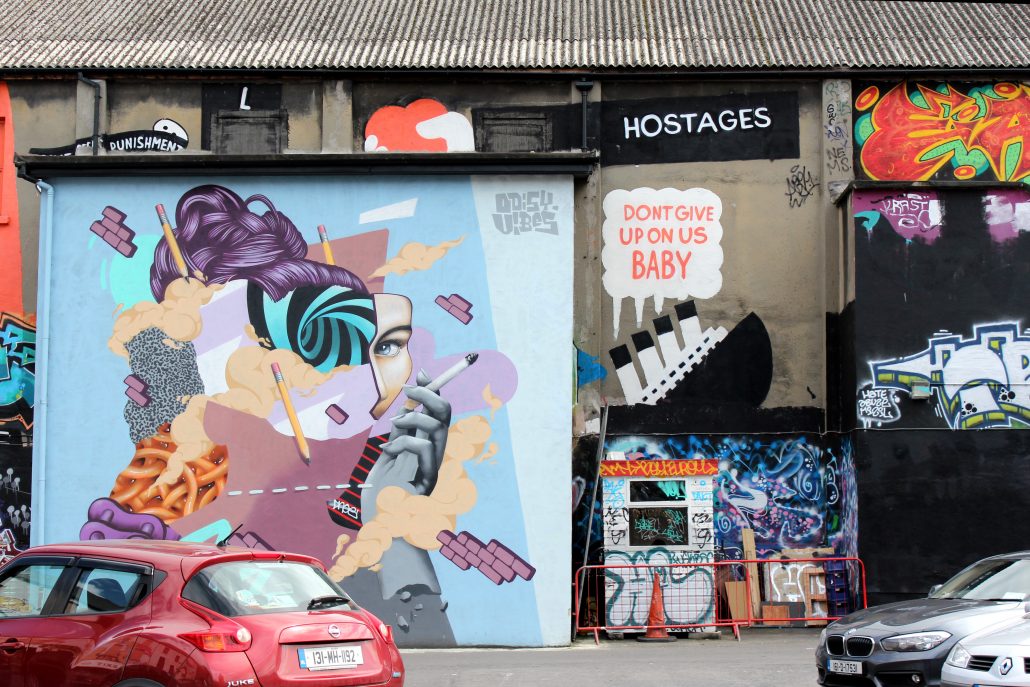 Where to find it: Tivoli Parking Lot, Francis street, Dubiln 8

This permanent artwork, a hidden treasure, literally tells a lot about the recent history of Dublin. The bronze plaques, realised by Chris Reid and completed in 2009, are the result of 4 years of work. The artist recorded the testimonies of residents and people associated with Nicholas Street, Ross Road, Bride Street, and Bride Road.”These plaques give historical significance to local voices”, we read on the artist’s website, “by making monuments to ordinary, personal and ephemeral experiences, which are woven into the fabric of everyday life.” It reminds me of the popular “Humans of…” model, in which you can learn about the authentic life of regular people.

“If you were looking for a fella to do something”, we read on one of these plates “you wouldn’t go to his house, you’d go to a pub. You’d ask where he drinks not where he lives”.

This little curiosity is something very hard to notice. On the national library in Kildare Street, at the base of the columns outside the sash windows, there are some animal carvings. You can see birds of prey and a dog chasing a rabbit. Nice work, kind of odd, but nothing special, right? And then, a group of monkey playing billiard. What?

See, this wing of the library was used as the Kildare Street Club, a clique attended by Dublin’s upper society. And these gentlemen surely loved playing billiard: for this reason, it is believed that the O’Shea brothers, who realised the carving in the mid 19th-century, meant for the sculpture to be a satirical representation, or better, a subtle social commentary, against the Kildare clubbers and the societal class they represented. 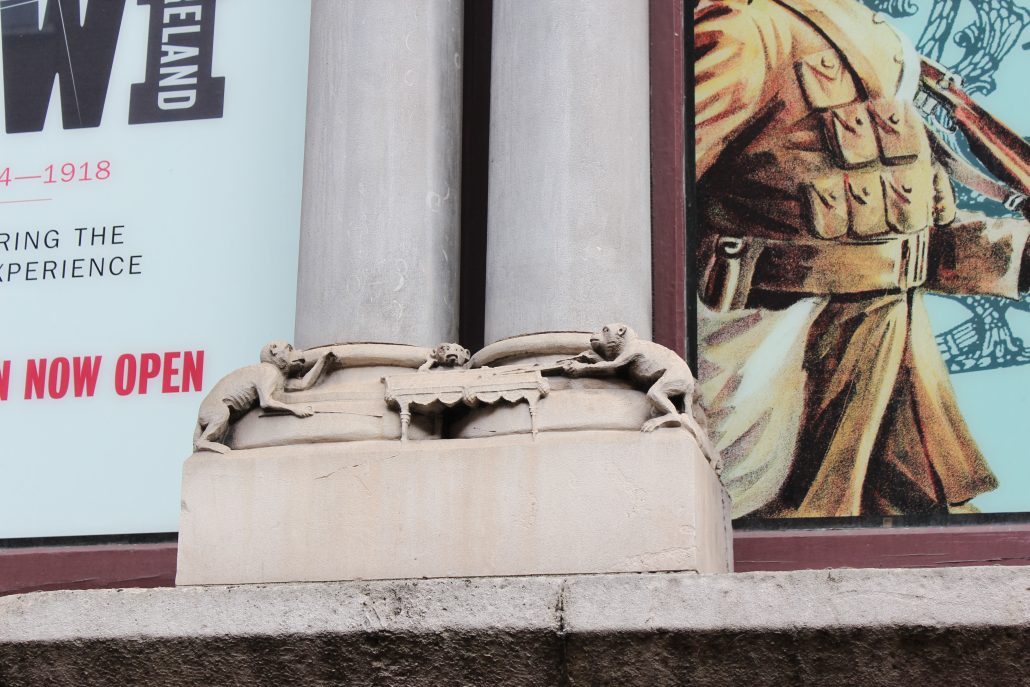 Where to find it: Columns of the National Library, 2 /3, Kildare street, Dublin 2

If you decide to have a walk in the silicon docks to explore the newest and most technological area of Dublin, be sure not to miss also the treasury building. I know, it doesn’t sound very interesting! There is however something special about it. A fiberglass naked woman climbing up the wall, titled “Aspirations” which was commissioned in 1995 by the company that built the office block. The company wanted the sculpture to commemorate the country’s struggle for freedom. With this in mind, the figure climbing the wall was a metaphor for Ireland.

There is a funny story behind this piece: at first the author, Rowan Gillespie, had sculpted a naked man to place on the wall. When Mr Ronan, the commissioner, was shown with the work, the initial enthusiasm soon soured: no way was he having a naked man climbing towards his window! So he ordered a gender reassignment surgery for the statue, and now the naked man is a naked woman.

I really don’t know how to feel about this. 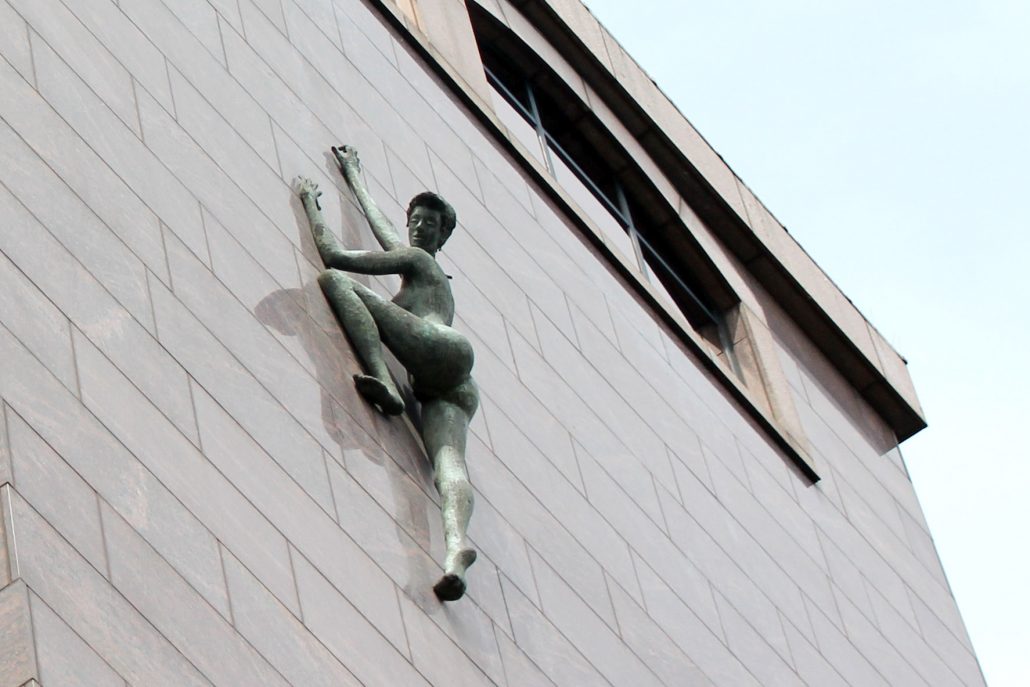 Where to find it: The walls of Treasury Building, Grand Canal street, Dublin 2

#8.Jesus of the Taxi drivers

In Cathal Brugha street, protected in a glass case, there is a statue of the Sacred Heart. It is usually to be found in O’Connell street, but it was moved probably because of the street works. It is very hard to find any detailed information about the statue. However, it features a plaques that reads:

“May God bless the taxi driver’s, keep them safe and watch over them on there journey’s (sic)”

The legend goes that there used to be an alter in the Gresham Hotel. When the Hotel was set on fire during the fighting in 1916, a taxi driver rushed through smoke and flames and dragged the statue outside. It was then placed in O’Connell street to provide protection to all the taxi drivers.

We don’t know whether this story is true, but does it really matter? It’s a very good story. 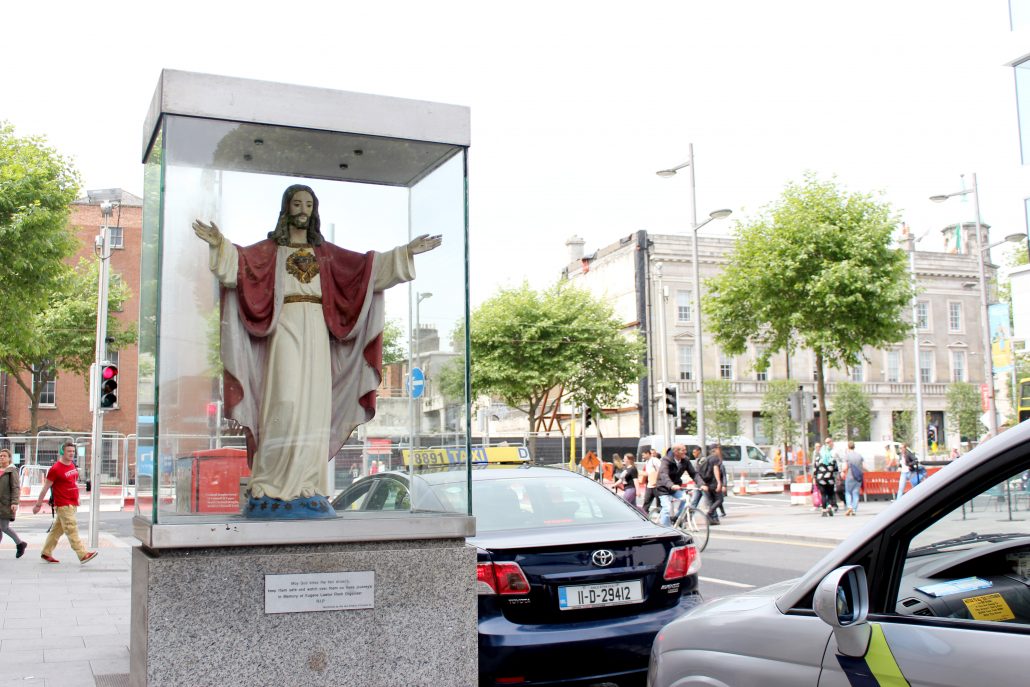 Where to find it: Cathal Brugha Street, Dublin 1

This last entry is dedicated to all the romantic people out there. Did you know that St. Valentine, the Patron Saint of love, was originally from Ireland? And also in Ireland you can find its relics. Specifically, in Whitefriar Street Carmelite Church, in Dublin 2.

Briefly, this is the story of the Saint: it’s believed that on February 14 278AD, Valentine was beaten with clubs and then executed by beheading for defying Emperor Claudius II. The Emperor in fact had ruled that marriages were to be banned. However, the rebellious Valentine, who was working as a holy priest, continued to marry couples in secret. Not only is he the Patron Saint of happy marriages and love, but also protects against fainting, plague and epilepsy.

You can go to his shrine to ask him to protect your marriage or to help you find love, or simply if you wish to meet a celebrity. 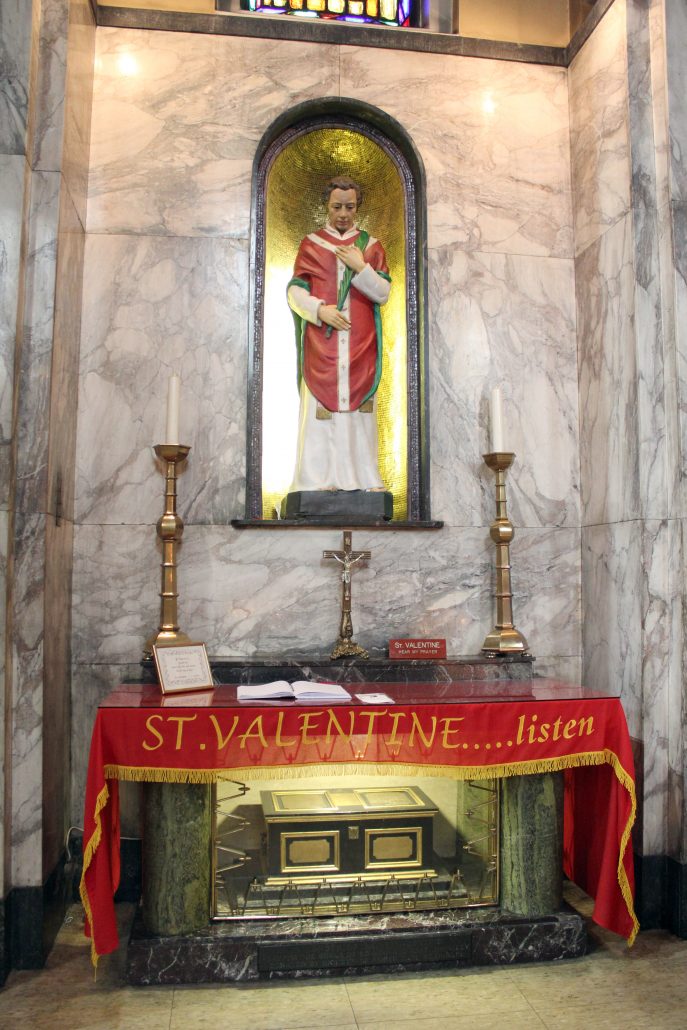 Click here if you want to see the map of Dublin’s secrets!

Do you know any other secret places in Dublin? Email them to us and we’ll find out everything about them!