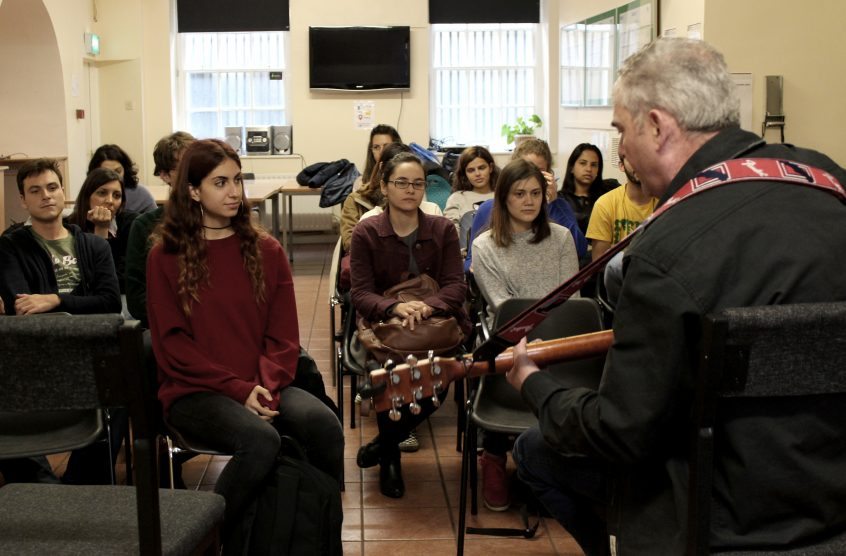 It is incredible how, despite its dimension, Ireland managed to preserve such a strong tradition and impose its culture on the rest of the world, considering it has a small population of 4 million people. One of the most recognisable features of Irish culture is surely its traditional music. Even to those who don’t know anything about Ireland, a beat from the bodhran (the traditional drum) or a note from a tin whistle (a traditional flute) will be enough to start visualising the Irish green landscapes and cliffs, or the mysteries of fairies and leprechauns.

We take the promotion of Irish culture very seriously, so we called Seán and Joe, two expert Irish musicians, to assist us in this task. Through their help, we were able to learn so much about Irish music in an incredibly amusing and interactive way. We first enjoyed a small gig and a demonstration of some Irish traditional instruments, which was already a pretty amazing spectacle.

But Seán and Joe wanted the students to really experience Irish culture through Irish music and they taught us some traditional songs. I could really see how Irish music is central to Irish culture and can how it can really help you understanding it: we weren’t only singing together and having fun, we also undertook a journey through stories of love for fishmongers (in Molly Malone), betrayals (in whiskey and the jar) and prodigal sons(in the wildrover). 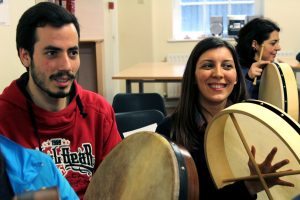 The part we all enjoyed the most, however, was when we were taught the basics of the bohdran (yay, free music lesson!). We could experiment first hand a crucial part of the Irish culture and we did a wonderful job at it (at least that’s what Seán and Joe told us). 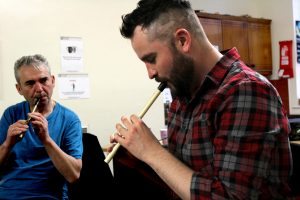