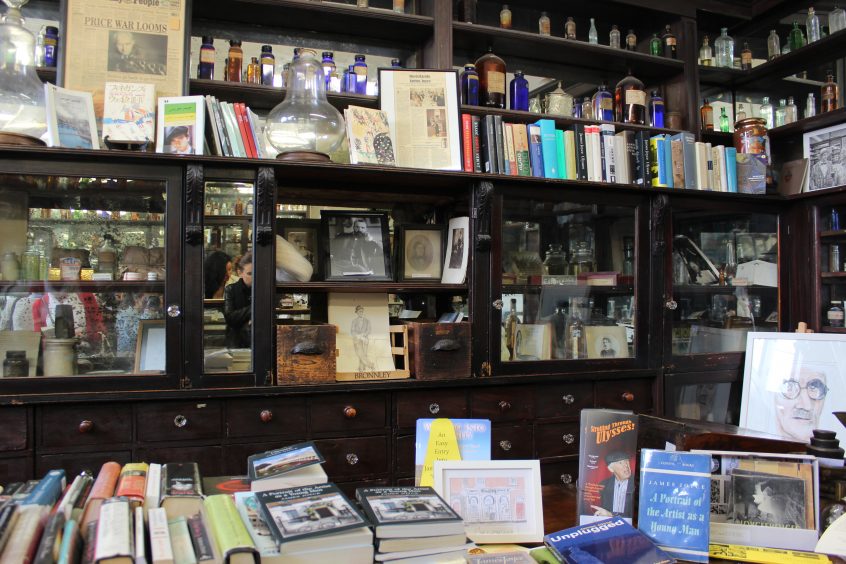 Dublin, one of the cultural capitals of Europe, is home of some of the most enduring writers of the English language. It can boast 4 nobel literature prizes (William Butler Yeats, George Bernard Shaw, Samuel Beckett and Seamus Heaney), who only represent a tiny fraction of the great writers Ireland has produced.

It is then worth to explore the literary heritage of Dublin, UNESCO City of Literature, to get to know the places and writers who contributed to the creation of the rich literary Irish tradition. To help you in this task, we created a quick guide to some of the cornerstones of Irish literature. This is by no-means a comprehensive list. However, it’s a good start.

Just around the corner of Alpha College, in Parnell Square, a gorgeous, original 18th-century building, houses the Dublin writers museum. The Dublin Writers Museum is, without a doubt, the first stop for an informative overview of Irish literary history. The Museums hosts a number of relics such as letters, first editions, manuscripts, from some of the most significant Irish writers, such as Bernard Shaw, Oscar Wilde and Samuel Beckett. The museum also hosts lectures, readings, exhibitions and live performances.

To check out opening times and to have further information, click here. 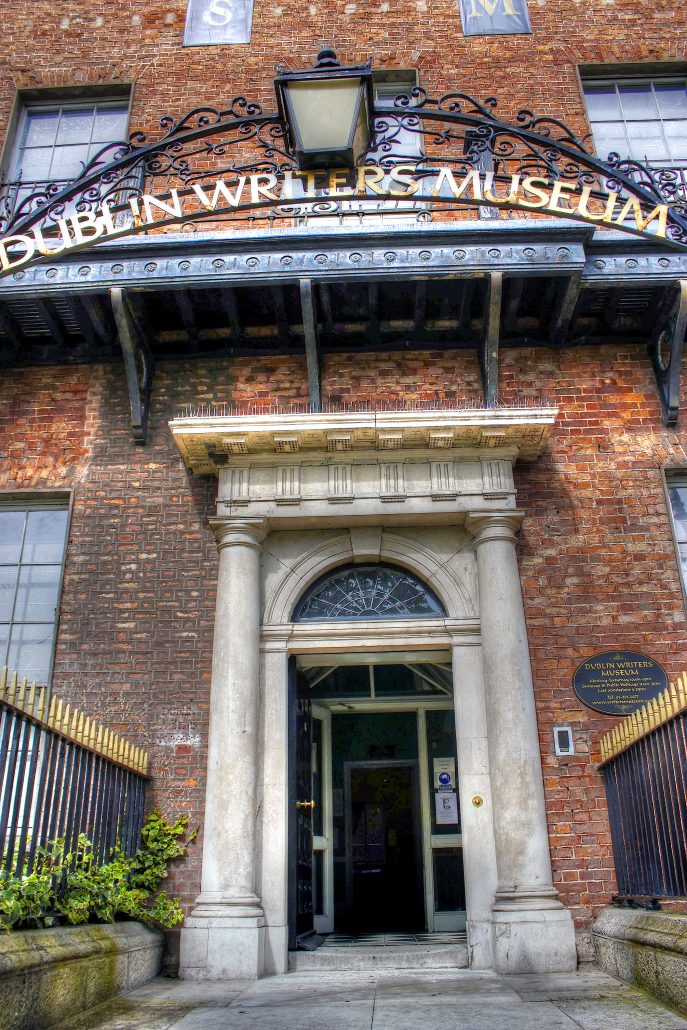 Where to find it: 18 Parnell Square, Dublin 1

One of the most emblematic elements of Irish literature can be found in the very proximities of Alpha College. I am talking about No. 7 eccles street front door, which is located in 35 North Great George’s Street, the same street of Alpha, inside the James Joyce centre.

No. 7 Eccles Street was the fictional residence of Leopold Bloom, the main character of Joyce’s masterpiece Ulysses. This address is central to the novel, as it is the first place were we encounter Bloom in the novel. You can view it at the James Joyce centre. 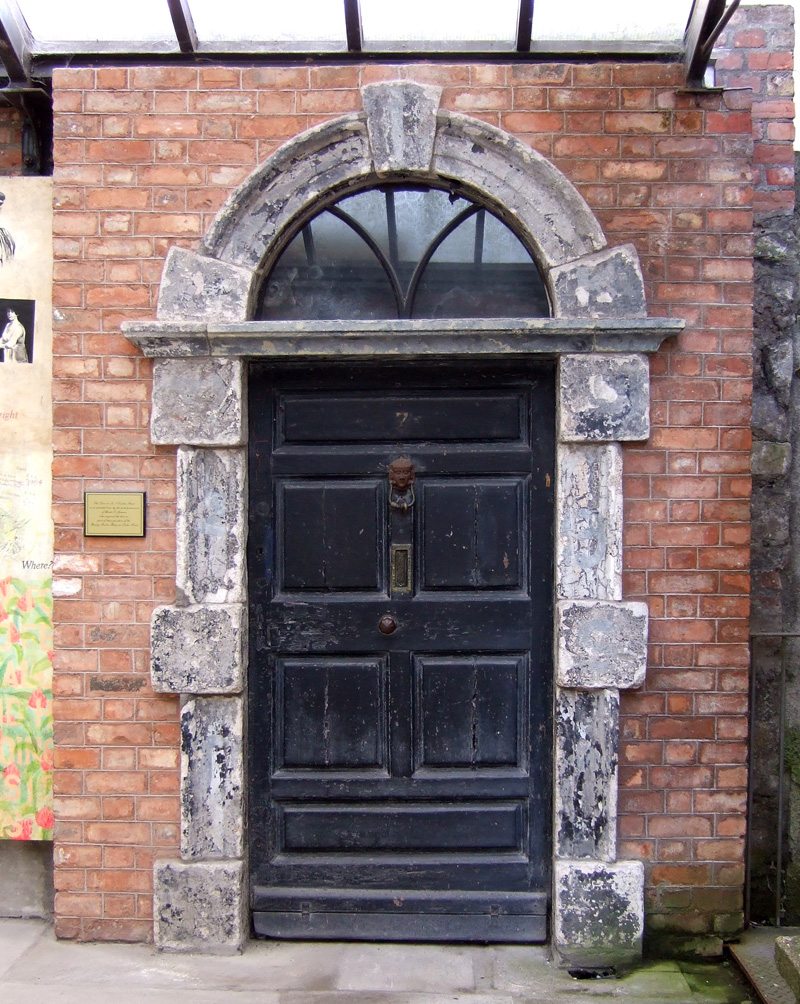 Where to find it: 35 North Great George’s Street, Dublin 1

In 1990, a Dublin Scholar, Danis Rose, made an incredible discovery while working on a critical edition of Finnegan’s Wake. He found 10 short stories Joyce wrote between Finnegan’s Wake and the Ulysses, which were collected and published under with the title Finn’s hotel.

Finn’s hotel played a significant role in Joyce’s life: it was here that he first met Nora Barnacle, the love of his life. Joyce revisited the hotel many times during his life. 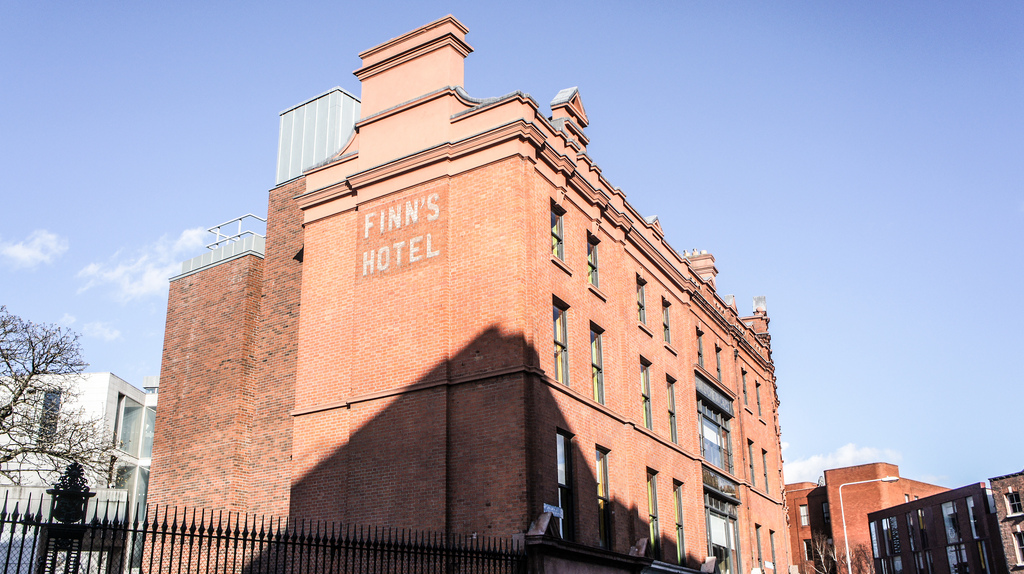 Where to find it: Leinster Street South, Dublin 2

Yes, another entry about James Joyce!

The citizens of Dublin really did much to keep alive the atmosphere found in Joyce’s books. You can, in fact, still follow the steps of Ulysse’s Leopold Bloom. This book was in fact a work of fiction that featured some real places in Dublin.

Sweny’s is mentioned in the Ulysses when Bloom goes to this pharmacy and buys a bar of lemon soap. He will carry it in his pocket like a talisman throughout the day. Today the place does not work anymore as a pharmacy, but is run by volunteers to maintain its original 1850’s Victorian style as a memento of Bloom’s pilgrimage in Dublin.

Here you can also buy Lemon’s soap, second hand books and attend to the daily readings of Joyce’s work. 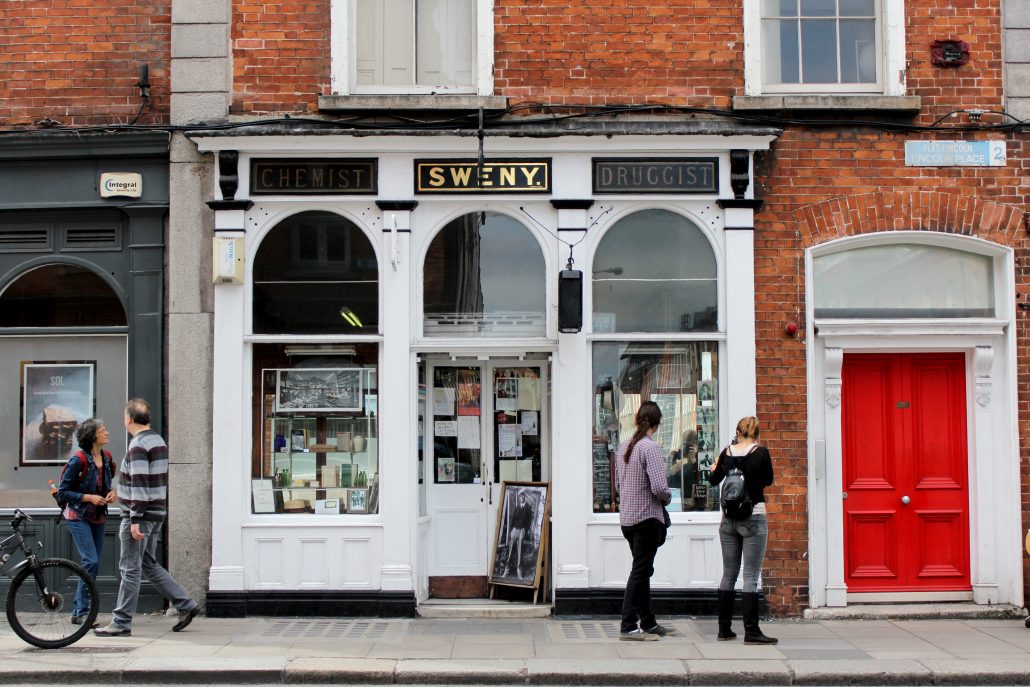 Where to find it: 1 Lincoln Pl, Dublin 2

This entry could be categorised both as a literary milestone and one of the Dublin’s secret spots. I am talking about the series of eight ceramic disks that, almost like a via crucis, represent and summarise Gulliver’s travel. The roundels are placed just a few block away from Saint Patrick’s church, where the clergyman Jonathan Swift used to work as a dean in the 18th century.

This can be seen as a creative way of linking Dublin to one of its famous citizens. 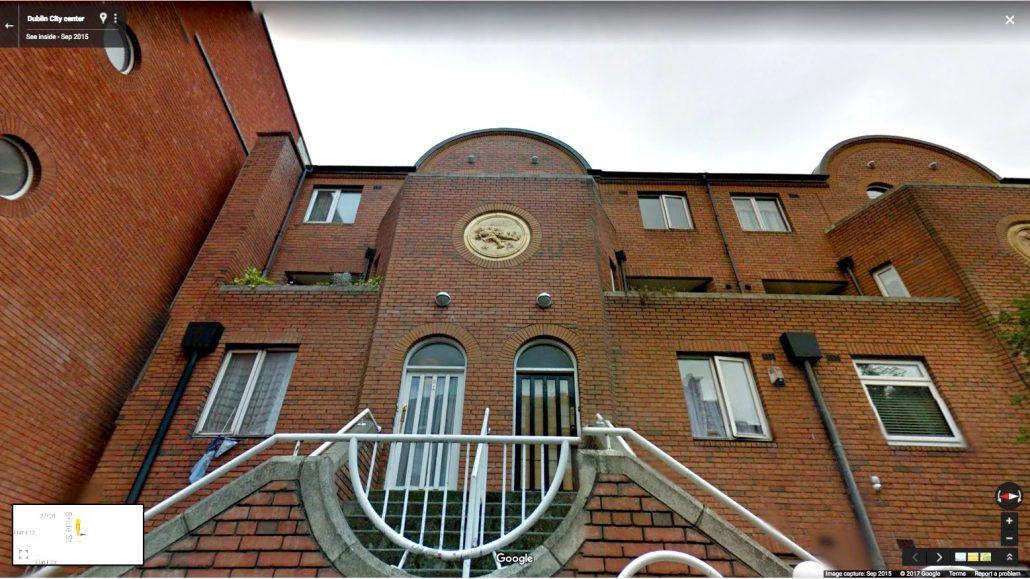 Where to find it: Golden Lane and Bride street, Dublin 8

Oscar Wilde was born at No. 21 Westland Row, Dublin, in 1854. He and his family, however, moved to No. 1 Merrion Square, just one year later. It is in this house, which soon became a cultural milieu, that Oscar spent his early years and his genius was probably stimulated by the famous literary salon hosted here by his mother.

The Georgian house is now owned by the American College Dublin, which refurbished it to recreate the atmosphere where the great author developed his talent. At this moment, unfortunately, the house is not open for viewings. However, any literature fan should not miss the opportunity to pay respect to the building. 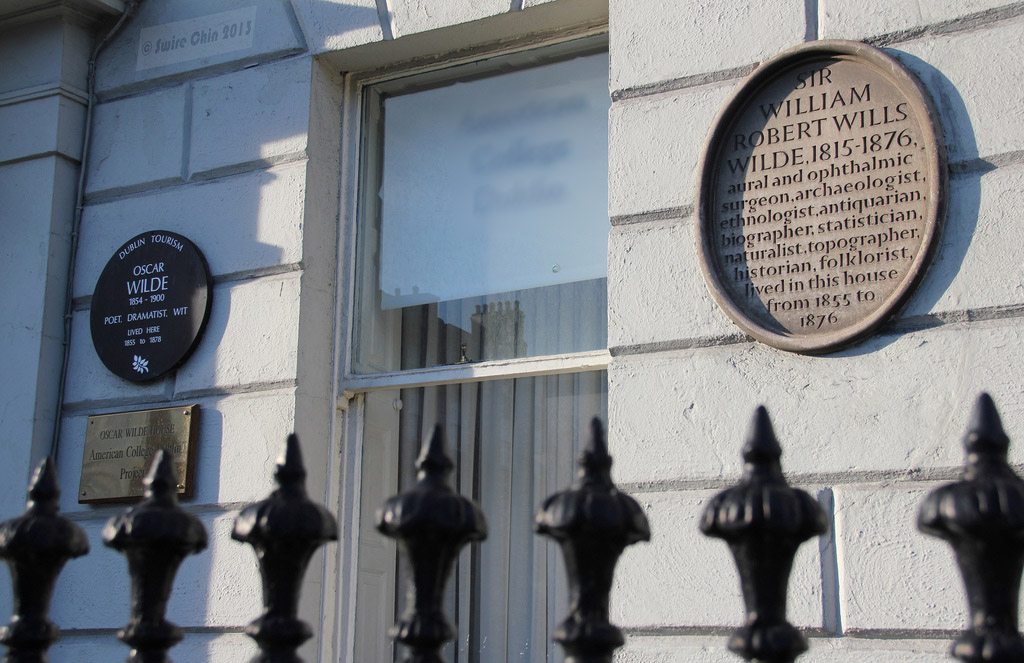 Where to find it: No. 1 Merrion Square, Dublin 2

Our last entry is a must see for all the bookworms out there. I’m talking about Marsh’s library, a well preserved library with works from the late Renaissance and early Enlightenment, and the first public library in Ireland. It contains over than 25,000 books from between the 16th and 18th century, hundreds of manuscripts and even 80 books from before 1500. The library is one of the last 18th-century buildings in Ireland still used for its original purpose. If you want to know more about times and visits, click here. 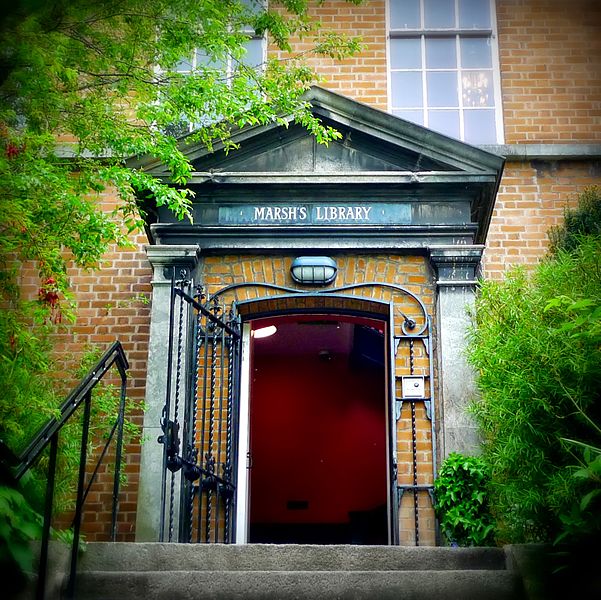 Where to find it: St Patrick’s Close, Wood Quay, Dublin 8

Click here to see these places on a map we have created for your convenience.

Do you know any other must-sees of the Irish literary tradition in Dublin? Send us your suggestion!