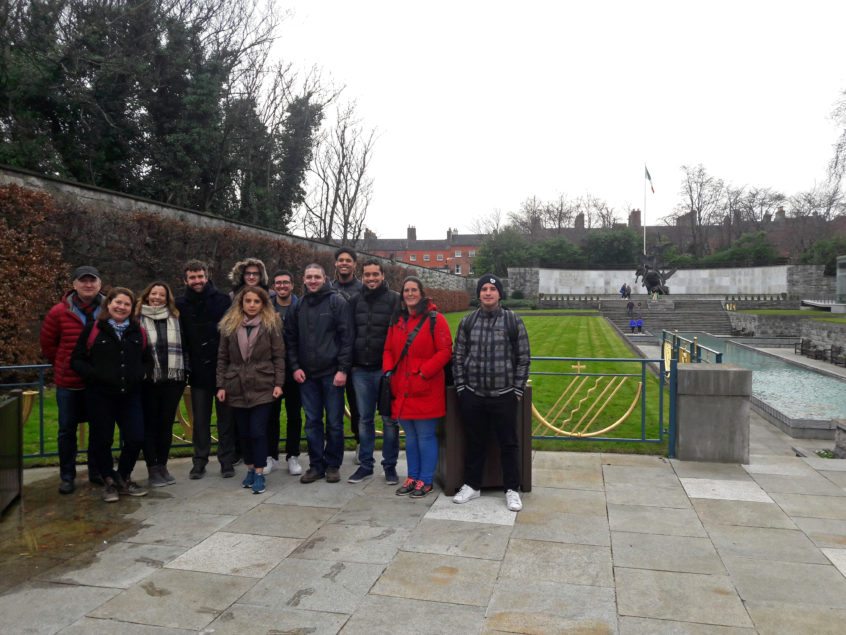 Last Friday, thanks to our special tour guide Stig, the students of Alpha discovered a lot about amazing Irish history. Even though the Republic of Ireland as a country is not that old, the history of Ireland goes way back. In case you’ve missed that, Ireland was under the occupation of Great Britain for more than 800 years. That’s a lot. Before that, the “story” goes from Gaelic (pagan) Ireland, through Christian Ireland till the Viking era. The famous “occupancy period” actually began thanks to the Normans.

During the Viking era, it was pretty common that Normans had huge, long boats. Two reasons behind this. If they didn’t, they would be probably the worst Vikings ever. And secondly, they kinda used them for transport. The problem when you own a huge boat is parking. You just can’t park it anywhere, you know what I mean. You need a long bar, so that you’re able to tie your boat up to it. Of course, you’re Viking and you’re super special, so you just want to use the best bar possible. In Dublin, the Temple family owned such bar. And that kids, is how Temple Bar got its name.

Moving on to the occupancy period, Ireland was a scene of several rebellions. Most of them were, unfortunately, unsuccessful. But you probably figured that out, since its “rebellions”. If they were successful, there would only be just one. Anyway, all these rebellions were pretty bloody. Irish people were in a major disadvantage. Not only they were a lot fewer in number, they also had poor equipment and non-qualified army. All these revolts were crushed – some of them in a really brutal way. After Ireland finally became free, the Garden of Remembrance was built to commemorate all, who gave their lives to Irish freedom.

The British occupancy was terrible for the Irish – dividing people to Catholics and Protestants. It shouldn’t be too hard for you to guess which group did not have any rights. Correct. The Catholics. They had no right to own properties of any kind (farms, buildings, etc.). It was forbidden for Catholics to study at universities. They could not grow vegetables nor own a cattle. They didn’t have a right to vote nor could be a part of the Parliament. And I could go on, and on, and on, and on. (But I won’t, don’t worry.) Enter Daniel O’Connell. The liberator. Probably the most famous man in Ireland (after Paddy of course). He was the one who succeeded with his Catholic campaign and brought the Catholic emancipation to Ireland.

Even though the Irish history is incredibly interesting, I would like to skip forward a little bit right now. Partly, because my knowledge about Irish history is limited. Partly, because I’d like to tell you something about the Spire. I believe I’m not the only one, who’s been wondering why it was built or what its purpose is – apart from the fact that it makes a good meeting point for tourists. So the Spire is slightly above 15 years old and it’s around 120 metres tall. This gigantic needle is hollow inside and there is a light on top if it – which can be fixed by the way. The Spire of Dublin was built as a replacement of Nelson’s column, which was destroyed by bombing in 1966. Its former name was the Millennial Spire of Dublin. Unfortunately, the builders failed to finish it on time and for some reason waiting till next millennium didn’t seem like a good option. And that’s all from today’s history lecture.