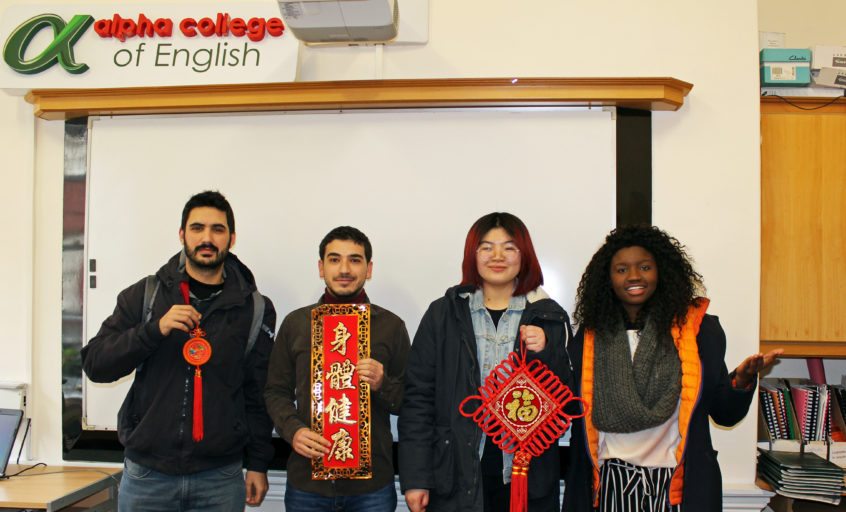 Some of you may know, some of you don’t, but the Year of the Dog is about to start. Curious about the meaning of it? So were we. Luckily, our students Lin and Tian Min helped me discover Chinese cultural heritage. Just keep reading.

Tradition of the Chinese New Year has been here for more than (get ready to be shocked) 3000 years! Feel old yet? Legend has it, that the name “Nian”, meaning either year or new year, was firstly used during the Zhao dynasty (1046 to 776 BC). According to Chinese mythology, Nian is a beast that lives under the sea or in the mountains that attacks people on the New Year’s eve. In the attempt to avoid his attacks, people cook earlier in the day and then stay up all night. Sometimes they even use firecrackers to scare him away. If you think this is too much, try googling some pictures of him. Personally speaking, I wouldn’t be my happiest self if he showed up in my living room.

Anyway, celebrations of the Chinese New Year nowadays last over 2 weeks and are filled with music, lights, traditional dancings and bell ringing. This is called the Spring Festival. Couple of days before the biggest Kool&theGang’s hit enters the scene, Chinese families come together to clean their homes from all the bad luck and decorate them with Chinese couplets, paper-cuttings, greeting cards or a Chinese knot. There is also a tradition of pasting the “Fu”, which symbolises good fortune and happiness.

New Year’s eve is a magical night when families gather together for dinner, usually consisting of good old-fashioned dumplings, spring rolls or rice cakes. After the feast, people watch the New Year’s Gala on CCTV (China Central Television), which makes perfect sense to me, since they’ve probably eaten too much it’s way too hard to move. Later in the evening, families watch fireworks and throw firecrackers, and they all stay up together until the sunrise.

On the following days, during the Spring festival, people visit their friends and relatives, eat rice dumplings, enjoy colorful festive lanterns, join temple fairs and eat even more dumplings. This year celebrations will last for 15 days from 16th February till 2nd March and this year’s special is the dog.

Dog is one of the 12 signs of Chinese Zodiac, together with rat, ox, tiger, rabbit, dragon, snake, horse, sheep, monkey, rooster and pig. Chinese Zodiac (which is very interesting, by the way) is basically a classification scheme that assigns an animal and its features to each year in a repeating 12-year cycle. The cycle makes it easier for other people, and yourself (in case you forgot), to find out how old you are, but not only that. It is believed that the characteristic features of certain animal are transferred to a person. I know what you’re thinking, but don’t worry. You’re not gonna come out with a piggy nose nor belching flames. (Although that would be kinda cool, wouldn’t it?) It means that you will acquire the nature of a respective animal, both strengths and weaknesses. So if you were born in a year of the dog, you’re considered to be loyal and courageous, but at the same time stubborn and emotional. I wonder how many of you doggos just said “I’m not emotional!”

Even though every year the festival period varies and every year brings some differences, one thing is for sure – there’s never enough dumplings during the Spring Festival 🙂