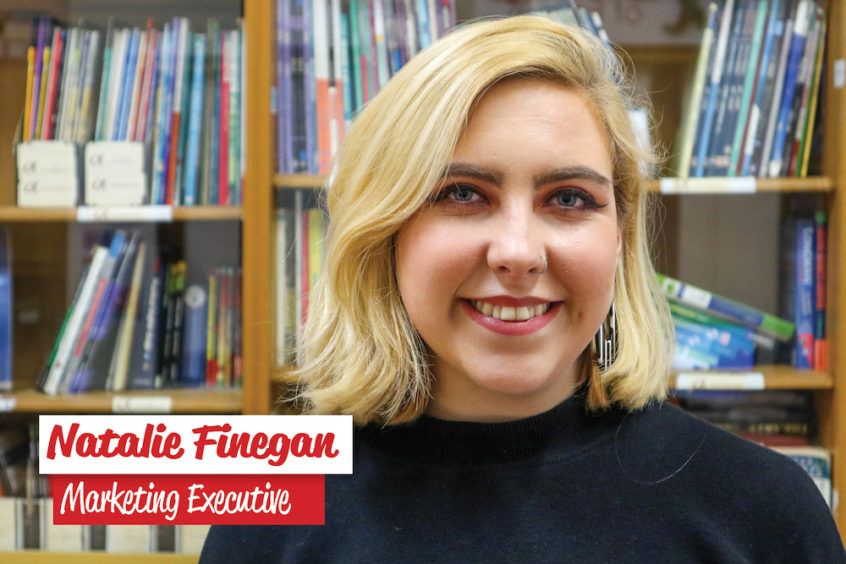 As the new Marketing Executive for Alpha College of English, I thought it might be helpful for everyone to get to know me better. Therefore, I’ve created a little ‘About Me’, with a Q&A and a game of ‘This or That’ so you can learn more about me… and possibly bring me flowers or chocolate when you visit the Marketing Office!

MA in Film and TV Studies

“These are a few of my favourite things“:

What do you work towards in your spare time?

Improving my animation and video editing skills – I love content creation and think animation is a really fun and rewarding process, albeit very difficult. I’ve been working on these skills in my spare time for a little while now, and am constantly seeing little improvements.  I love stop-motion animation, so I’m working towards that next.

Do you have any pets?

Unfortunately I don’t have any pets. My boyfriend has a dog called Trixie, so I guess that kind of counts. I do in fact have a few animal tattoos, so I can count them as pets too, I suppose.

What animal tattoos do you have? Are they your only tattoos?

I have a wolf, an elephant, and two turtles. I have eight tattoos in total, and have three more in the pipeline.

Presumably you prefer tattoos to piercings?

I do, although I love piercings too! I have my nose pierced, and have several ear piercings.

I hate sneezing – it’s horrible! It makes me feel like I’m drowning, or have just gotten out of a swimming pool. I also hate the build up to sneezing, having an itchy or runny nose etc. It’s difficult to describe – but sneezing is definitely not a favourite of mine.

What food is delicious but a pain to eat?

Corn on the cob, because all the little pieces get stuck in your teeth each time you take a bite, which is so annoying and generally not a good look.

If someone famous narrated a film about you/narrated your autobiography, who would you want to be the narrator?

There are a lot of people with great voices. Consequently, if this were an option, I’d have it narrated through sequences/chapter by chapter and have someone different narrate each chapter.  In particular, Anthony Hopkins, Ian McKellen, Sean Connery, James McAvoy, Jeremy Irons, Keira Knightley, Helen Mirren, Emily Blunt… to name a few, are some of the people I’d choose. With that in mind, it would have to be made up of short scenes/chapters to fit in all the people I would want!

What’s the coldest you’ve ever been?

I once swam in a glacier river while on holiday in America, so that was probably the coldest I’ve ever been. However, I probably say the words “I’m so cold” and “this is the coldest I’ve been in a long time” on a daily basis, so who knows which is true.

What’s the worst thing you’ve eaten out of politeness?

This is actually a very long list, due to the fact that I hate telling people I don’t like something – especially if they’ve gone to extra trouble to get it for me. I’ve been a coeliac since the age of two, as a result there have been a few occasions where people have bought me some “special food” and it’s been awful. One that really sticks out in my mind is a vegan naked burrito, which was essentially just milled mushrooms with some flavourless beans and kale. It was disgusting.  Another thing that sticks out is jelly and ice cream, because it reminds me of hospital food!

What’s the most awkward thing that happens to you on a regular basis?

I don’t recognise people when I see them in public. I have really bad eyesight, and as a result, sometimes I see people I know and they wave at me, or smile at me, but because I can’t see them until they’re close to me I generally don’t react. Afterward I have to explain to them that I have poor eyesight, and that I wasn’t ignoring them. So, if you see me and I seemingly ignore you, there’s a 90% chance I haven’t seen you.

Being a Film & TV Studies graduate you must really love films – what’s a film you watched recently that you really enjoyed?

A movie I watched recently that I really enjoyed is Glass, the newest instalment in the M. Night Shyamalan series. I watched Split when it came out, and absolutely loved it, so I had high hopes for Glass and it really didn’t disappoint. James McAvoy is an unbelievable actor, he plays his part(s) (very minor spoiler alert for those who haven’t seen the films yet) so well – I think he deserves an Oscar for Glass. I would highly recommend going to see that one in the cinema.

Where’s your favourite place to picnic in Dublin?

Either Stephen’s Green or the Boardwalk. Despite being overrun by some dodgy characters, the Boardwalk is nice in the summer because it overlooks the Liffey, it’s also in the very centre of the city near all the shops so it’s easy to buy picnic food, and the bench is pretty comfortable.

I love playing ‘This or That’ over on Alpha’s Instagram page , and thought it would be fun to play as part of this ‘Get to Know Me’ instalment!

Alice in Wonderland or A Christmas Carol?

Both, but if I really had to choose I’d pick pirates.

Weird, but not in a creepy way.

Thus concludes my Q&A and ‘This or That’ game – keep an eye out for my new marketing campaigns, course updates and Instagram posts, and pop into the Marketing Office in Alpha to say hi to me!